Brett King, one of the top Influencers in the FinTech world, discusses industry's most pressing questions: is blockchain the future, does working in the finance sector pay off for software developers, and has the FinTech movement triggered a culture shift?

JAXenter: The World Economic Forum wrote in a report published a couple of years ago that “blockchain can reshape financial services.” Do you agree with this statement? Is blockchain the future of FinTech?

Brett King:  It’s definitely part of the future. The trend is toward real-time capabilities across the financial services space, along with agency-based commerce and alternative value and payments systems based on cryptocurrencies and IoT. None of these capabilities are easily supported by existing bank core systems and payments architecture, so blockchain is definitely part of the future.

Blockchain is definitely part of the future.

JAXenter: What will happen if blockchain becomes “the beating heart” (as Giancarlo Bruno, head of World Economic Forum’s Financial Services Industries said) of the finance industry? What are the benefits? How about the drawbacks?

Brett King: Real-time experiences are also going to detach KYC and identity from bank products and services as these will be embedded in the moment. The benefits of this will be highly contextual and responsive bank utility available when and where you need it.

JAXenter: How much value is stored in smart contracts? What can they actually do and what are the misconceptions about them?

Brett King: Smart contracts can be of any value. Today we’re seeing smart contracts built around solar panels for the sun exchange (for example) that manage the generation assets and energy production on the blockchain. JP Morgan are managing part of their contracts via AI, especially for repetitive legal stuff. AI will result in most of the procurement and the value chain eventually moving to autonomous smart contracts – misconceptions are that this is a long way off.

JAXenter: How can entrepreneurs leverage blockchain this year? How can they capitalize on this technology?

Brett King: ICOs will continue but the biggest thing in 2018 is seeing lots of early proof of concepts moving to production. We need a ton of resources to transform existing bank architectures to blockchain. Not consultants. Real blockchain coders 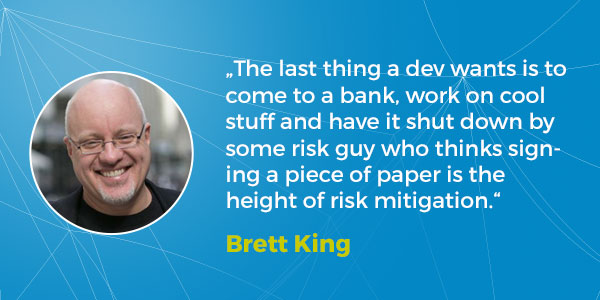 JAXenter: Containers (and orchestration tools) are all the rage right now. Will general interest in containers grow this year?

JAXenter: Has the FinTech movement triggered a culture shift in banking or are banks resistant to change?

Brett King: Banks who resist will suffer from lagging infrastructure and experiences. Fintech globally has redefined much of the experience expectations of customers. I know for Moven both Wells Fargo Greenhouse and Chase Finn we’re heavily influenced by our design. The challenger banks in the UK have reset expectations on account opening and app features there. Alipay and Tencent we chat dominate Chinese payments. Betterment, Acorns, and Digit have redefined mass investment. This doesn’t even touch blockchain and architectural changes. Banks are no longer ignoring the threat and frankly, are spending billions to catch up. The smart banks are investing or partnering with Fintech because they realize it’s cheaper and faster than building themselves.

Banks are no longer ignoring the threat and frankly are spending billions to catch up.

JAXenter: What is the most mature sub-segment in FinTech right now?

Brett King: Globally? China payments with 92% of mobile payments on Fintech rails. Outside of that, I’d say challenger banks, cross-border payments and robo-advisory is quickly maturing.

JAXenter: Do you think Open APIs hold the key to the future of banking? Why/why not?

Brett King: This is a massive change. It levels the playing field for Fintech’s with access to data and rails that allow them to build super compelling experiences, but it reduces the advantages Banks have as regulated institutions. It erodes most of the advantages banks have had from a regulatory platform perspective and forces them to adapt much faster to the experience changes driven by tech.

JAXenter: Does working in the finance sector pay off for software developers?

Brett King: Yes, but increasingly it’s getting hard to attract talent from mainstream tech. Banks like Chase, BBVA, Capital one and USAA are removing process, compliance and policy roadblocks to tech teams and this is the biggest thing banks must do culturally to attract devs. The last thing a dev wants is to come to a bank, work on cool stuff and have it shut down by some risk guy who thinks signing a piece of paper is the height of risk mitigation.

JAXenter: Do blockchain and IoT go well together? What do they have in common and why is this “relationship” built to last?

Brett King: IoT assets will live on the blockchain managed by smart contracts.  It’s built to last because nothing we have in existing core systems could cope with an autonomous vehicle or drone that owns its own bank account for automated commerce. 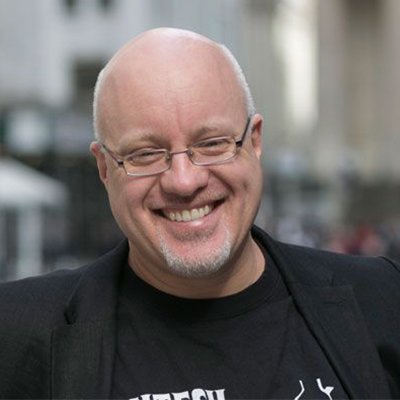 Brett King
Brett King is a futurist, an Amazon bestselling author, an award winning speaker, hosts a globally recognized radio show, is the CEO of Moven, and in his spare time enjoys flying as an IFR pilot, scuba diving, motor racing, gaming (mostly FPS) and Sci-Fi. He advised the Obama administration on the Future of Banking, and has spoken on the future in 50 countries in the last 3 years.