JAX Finance, 3-6 April 2017 The Conference for Technology in Finance
2
Mar 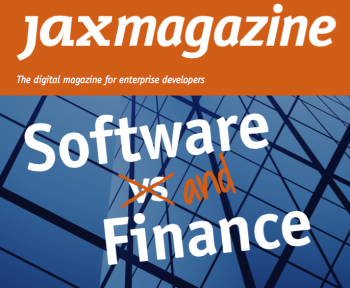 IT is a must have for most banks these days – a massive change from its previous “optional” status. That being said, if banks are trying to win developers over, why shouldn’t the latter learn a bit about this sector? This JAX Magazine issue is packed with goodies — it’s our treat!

However, in order for that to happen, software engineers must not be treated as second-class citizens; development units have become a primary producer of business value, so why not admit that without them growth would be futile?

Changing the status quo of Finance

The technological needs of the finance industry include aspects such as Continuous Delivery, Java, Big Data, machine learning, low latency etc. By embracing these elements, the finance sector can change the status quo and co-exist with what appears to be a fierce opponent: FinTech.

How should banks respond to FinTech? Acknowledge that disruption is here to stay, find ways to partner and transform challenges into opportunities. This way, the digital future can belong to both “traditional” banks and disruptors – provided that software engineering takes center stage.

Thirsty for more? Open the magazine and see what we have prepared for you.

Payments are about to change
John Davies

The traditional banking sector is much more “intrusive” than Bitcoin

Looking beyond the blockchain hype

The use of Java in finance

What can you do to minimize the risk?

Don’t fall into the “rewrite from scratch” trap
Sahil Patel

Eclipse Two: “I want to use Electron as a vehicle to rethink the IDE experience”

“In a way, Apache Beam is the glue that connects many big data systems together”